Visigoths vs. Mall Goths is a tabletop roleplaying game and dating sim about the conflicts and romances among the warriors who sacked ancient Rome and 20th century spooky teens, set in a suburban Los Angeles shopping mall during 1996. There are a lot of bisexuals.

You can also order the softcover book from Twenty Sided Store or Indie Press Revolution!

* Funded on kickstarter in 24 hours!

* For 4-6 character players and 1 facilitator player ("The Mallrat").

The plot structure of Visigoths vs. Mall Goths resembles an open-world videogame RPG. Designed for either one-shot or campaign play, each adventure episode offers several quests that you may choose to pursue (or ignore), and the mall setting is packed with many strange retro marvels to discover. Or you can just replay the game over and over to kiss all the kissable clerks.

Also a LARPer-friendly introduction to tabletop.

Bonus: you can also use this setting and these supporting characters (NPCs) in other roleplaying games! Expand your universe with goths!

“It is the 21st century and I can finally get my Bisexual take on That Bit In The Mall In Bill'n'Ted and the world is better for it."

-  Kieron Gillen, creator of The Wicked + The Divine and DIE

"I love this project for its inherent comedic genius, ‘90s nostalgia, and because of how queer it is.”
Trin Garritano, Games Digital Outreach Lead at Kickstarter, in “Projects We Loved: 15 of Our Favorite Kickstarter-Funded Projects from 2019”

"VG vs MG combines everything I love: occult time travel, the '90s, and queer culture, with things I never knew I needed: an emo grudge tracker and a turf war that shouldn't really make sense but totally does. Lucian makes magic with his games always, and this is no exception."
- Hannah Shaffer, designer of Damn the Man, Save the Music! –

In order to download this game you must purchase it at or above the minimum price of $20 USD. You will get access to the following files:

Support this game at or above a special price point to receive something exclusive.

Free PDF If You're Black in the US

If you're Black in the US, I have free copies of Visigoths vs Mall Goths reserved for you. Just take one if receiving a silly game would in any way improve your day.

Free PDF If You're BIPOC in the US

If you're BIPOC in the US, I have free copies of Visigoths vs Mall Goths reserved for you. Just take one if receiving a silly game would in any way improve your day.

Just ran my first game of this last night using the first adventure (Quoth the Raven, "Whatever.") and everybody loved it so so so so much. It was so easy to run, easy to play, easy to be ridiculous with. My morning has been filled with friends talking about it and telling other friends how cool it was.

We ended with everyone getting a queer date for the Valentine's Skate, including the Visigoth Conqueror and Mall Goth Theater Tech going together after awkward admissions of feelings over a hostage negotiation (as the Mall Goths had taken Brunhilda hostage in retaliation for Raven's kidnapping).

i love visigoths, they invaded the roman empire along with the ostrogoths!

I found out about this game from Fandible a few years ago. When I found it hanging out inside the Racial Justice and Equality Bundle, I downloaded it immediately! I've run it twice so far, with so much enthusiasm from my players each time. There's so much silliness to be had, so many different characters to romance, and oh so many puns. We still mention Goat Danny and Chri-spear-na Aguilara every once in a while, and I have a feeling that more Goth games are in our future.

I ran The Little Mx. Scare-All Pageant adventure with a group of six a few weeks back and we all had a blast. It involved a lot of Visigoths flirting with Mall Goth-aligned clerks, fainting goat drama, and queer accessorizing. And someone wrote a full poem for the pageant at the end!

It was my first time playing or running the game, and I'd run it again in a heartbeat: extremely manageable and extremely fun.

I played this as part of my Discord-based birthday activities yesterday and loved it! We lost a player partway through and wound up having a much more collaborative Goths experiences, which was still incredibly fun and silly in all the ways I wanted. As a bisexual medievalist, I was all for it!

Speaking personally, this game is so much fun to run. Speaking for my players, they absolutely loved it! So much laughter and excitement at the table the whole game. It is quick to learn and teach, and also has great replay value.

Played a session of this game last summer and it was an absolute delight! So much nostalgia and EXCELLENT pun power. Can't wait to play again at home!

This is such an indulgent game, which is immense praise! It was a joy to dive into this world in our convention game at Big Bad Con. The Visigoths are melodramatic, the mall goths are melodramatic, the PUNS oh my goodness the puns. Every second of the game felt like the best moments from every 90’s teen mallrat romcom put in a blender with a medieval fantasy soap opera. It was joyously queer & superbly over the top. The game comes with the mall setting completely fleshed out, with punderfully named stores and shop clerks you can’t help falling in puppy love with. We played one of the premade scenarios in our game and it was a blast!

I cannot wait to play this game again, I adore it! 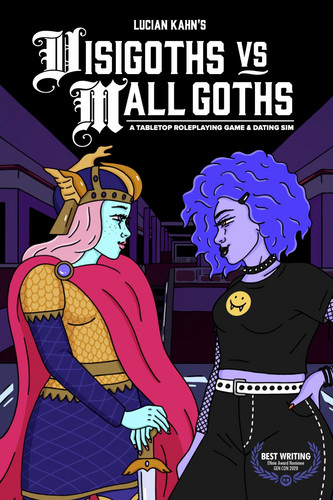 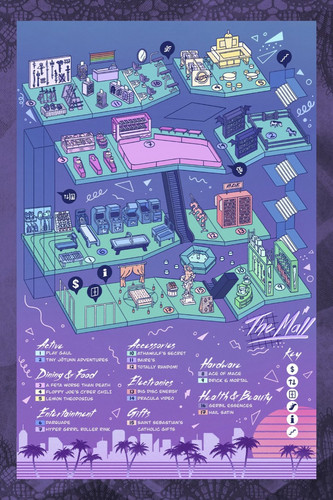 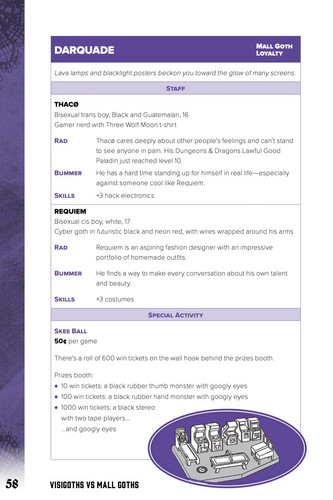 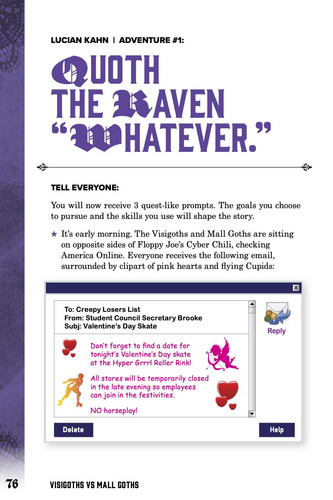 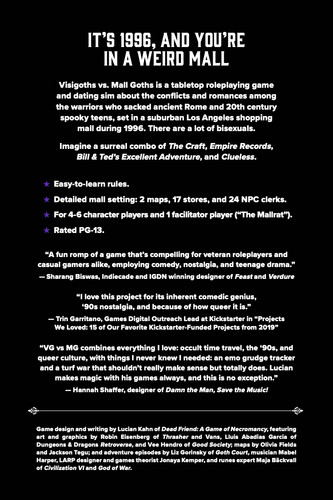